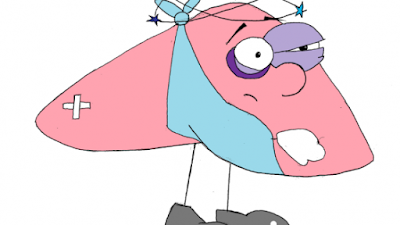 See, in the womb (way back when) you have two pancreatic ducts which are supposed to fuse together. Mine didn't. I happens. Something like five to fifteen percent of people have this defect and most of them don't have any symptoms. Some of us do.
Symptoms like, "ouch, my right side hurts, I mean really hurts, I mean it's uncomfortable, no it really hurts... and I'm nauseous and I can't sleep and I feel like I'm going to pass out or puke and I'm tired, tired, tired." It's kind of like that. I think my gall bladder was taking up the slack for ol' panky, and when my gall bladder failed and was then taken out, the symptoms just stuck around like that asshole at the party who's too drunk to leave, but won't pass out either--you know the dude...or you are the dude. Take a long hard look at yourself, man.

As a joke, my wife and I used to say "Ow, my pancreas." I think it was from Encino Man. How sad is that to quote Pauly Shore? But hey, funny is funny, dude...and he is the weeh-zul.

So the condition is called Pancreatic Divisum and when I start my garage band this summer, I think that's going to be the band's name. Or at least the first album name. We can have songs like "Glucagon" and "The Enzyme Boogie." Metal shit like that.

The doctor says there really isn't a treatment or any sort of fix except for a possible surgery that puts a stint in the ducts of the pancreas to try and open them up so the chemicals can flow like normal, but that procedure carries pretty high risks, and often causes pancreatitis which sucks like Dyson and can lead to death.

So what do you do? Well, you diet. Here's the catch:  low fat. Like really low fat. Like a tablespoon of olive oil or butter is all the fat you can have for the day, and you can't eat it all at once. Look at any nutritional label, folks. Fat is everywhere. It's what makes stuff taste good. Ever eaten a plain baked potato? No. Why? Because it sucks, that's why. Cheese? Ha!
But wait, there's good fat, right? Not to your pancreas. It doesn't care. Fat is fat. Avacados? Nope.
So, hearing this news, you would naturally want a drink, right? Drown your rice cakes and applesauce in some Maker's Mark right? No. Alcohol is the other part of this diet. None of that either. Well, very little of that. Like one beer is okay, but you might still have some pain.

So that brings up the third part of this condition--it makes you an asshole. I don't want to be an asshole, but not being able to eat or drink alcohol kinda puts a damper on the old social scene. And it's tough to go to a restaurant and order a salad, no dressing... Or to try and explain to folks why you're not able to eat certain types of bread...sigh. Who doesn't like to explain their medical condition to everyone over and over just so they can hear, "Well, you could probably eat this...or have you tried this...or that's good fat. You can eat good fat, right?"

If I have one person who sort of understands, it's my daughter who has been dealing with an invisible illness for almost a decade. Maybe this was for me to understand more about what she goes through. Maybe it's just one of those things.

If there's any good news in all this, I've lost 35 pounds. I guess that's a good thing. I can be a skinny asshole. So bear with me, folks. I've got stories to write, movies to make.