A Long Time Ago in a Galaxy Far, Far Away...without spoilers.


Episode VII: The Force Awakens is out. Unless you're hiding in the outer rim, you've probably heard of it. Maybe you're sick of hearing about it. I don't care, hear some more:

Zero spoilers, although I will include images from the trailers.


I was about four and a half when the first Star Wars movie came out (That's A New Hope, Episode 4--just to be clear) and it affected me. I made swoosh noises with the little plastic X-wings and Tie Fighters. I cupped my hands over my mouth so I could breathe like Darth Vader, I had all the toys (wish I'd kept them!)...I can't pick up a dowel rod, baseball bat, roll of rapping paper or even a ball point pen to this day without making lightsaber sounds. When my kids were born, each of them had to hear, "No. I am your fah-ther!" And occasionally, when it's really quiet, I like to make wookiee noises even at forty-three years old. Let's say the film series had an impact.

I haven't read any of the expanded universe and I don't care to. If that's your thing, great, but I am all about the films and that's where I will gladly stay. 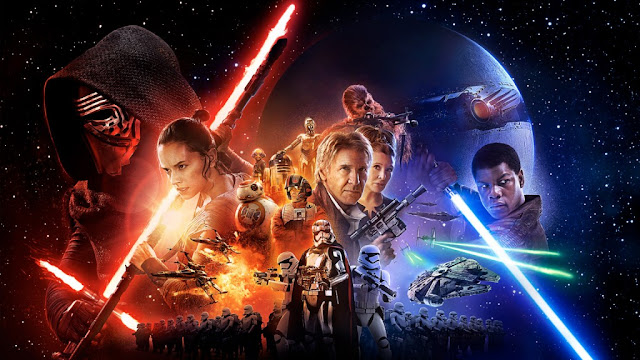 So we'll only mention the trash heap that included Episodes 1, 2 and 3 briefly so I can say that I got suckered in. Three times. That's the level of loyalty I have for the film franchise. I saw all six movies in the theater and for a while there--created by George Lucas or not--I hated him. A comedian I can't remember right now said watching the first prequel was like going to a family Christmas gathering and getting molested by that one creepy uncle. The second and third installment were like going back again knowing that uncle was still there, hoping he wouldn't do it again, but damn...he did it again.

I don't feel quite that strongly about it, but it was clear to me and everyone else that George Lucas's ego has grown to the size that he was no longer in tune with the dreams of a young, whiny Luke Skywalker who wants nothing more than to get out of his small-town farm life and become a fighter pilot. He was no longer the guy who tinkered on old jalopies in hopes of creating a monster like the Falcon. He was a rich old blowhard who surrounded himself with yes-men and yes-women and told them if they didn't like what he made, he would take his ball and go home.

Then something miraculous happened--he sold his ball to Disney. I'm not a fan of any mega-business buying up all the properties in the world and incorporating them into a giant cash machine. Lets face it, they own everything. If it's successful and franchise-worthy, Disney (The Empire) wants it. Marvel. Pixar. The Muppets. Lucasfilm. I was leery, but let's face it--I enjoy the hell out of the majority of Disney movies. And that meant there was a chance that another Star Wars movie might come out and it might be written by someone other than weird-uncle George...and it would most surely be directed by someone other than weird-uncle George... A New Hope? 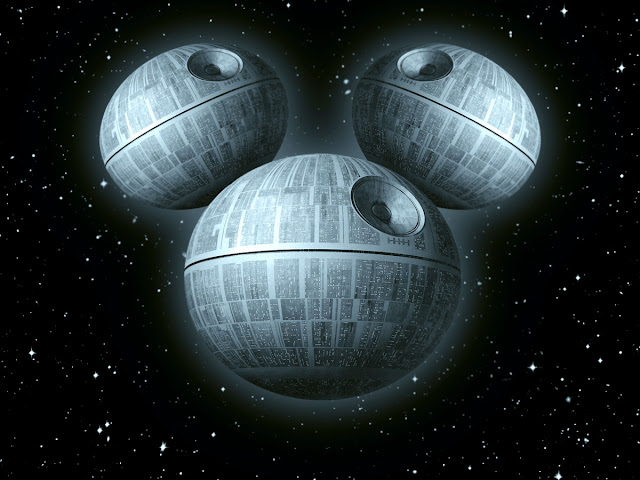 Where's my review? I'm getting to it. Hold on a few more paragraphs.

Then there were some talks early on that George would be a consultant. Ugh...here we go again. But then miraculously again, there was an interview where he said he was stepping away and some quote like "They probably won't listen to me anyway." -The Empire Strikes Back?

And finally it was announced. JJ Abrams would direct. I saw that as a victory. He has a track record of making epic films with humor, tension, strong stories all while paying tribute to the source material (MI3 and Star Trek-love or hate them, they are well made films). He's a strong starter (Lost, Alias). He does well with original material (Super 8), and he's a great writer. When I heard he was writing alongside Lawrence Kasdan (Empire, Jedi, Raiders of the Lost Ark) and Michael Arndt (Toy Story 3, Little Miss Sunshine), I felt that old boiling, building need for this movie to come out. That kid inside me was ready to go again to the Christmas gathering because the weird-pervy-uncle had made other plans. 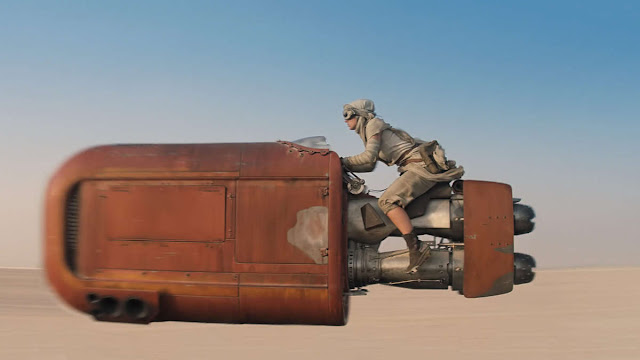 As time went on, the news got bigger and bigger. They were loading up on practical effects. They were sticking with the original trilogy only. It was going to be set thirty years after the end of Return of the Jedi--wait...that means!!!! Yes, they were bringing back the original cast. Holy Wampa shit, Han and Chewie! Luke and Leia! Artoo and Threepio.

Then the trailer came out and all felt right with the world. So that's when I began to worry. The hype machine was in full swing. And the arc of that swing got larger and larger. Presale tickets went bonkers. More trailers. More mysterious shots. The online world went berserk trying to piece story details together. Why isn't Luke in the poster. Who is Kylo Ren. What's up with that lightsaber? What's up with the silver stormtrooper and what's a Snoke? Is Rae somebody's kid? Are Han and Leia still together? WTF?

I shut it all out. No spoilers. No information. I stuck with the first trailer and the feeling that brought and I sat quietly and waited for opening weekend. The early reviews were exceedingly positive and the one I was looking for, strangely, came from Mr. Patton Oswalt who also had some very harsh words for Mr. Lucas about the prequel trilogies...something about going back in time and killing George with a shovel. Again, I don't feel quite that strongly about it, but I understand the sentiment. Patton said simply, "JJ did it." and that was enough for me. I bought four tickets online and told the family we were going to see Star Wars. The family was on board. Rock!

Review time (it's about time, right?) No spoilers, I promise: 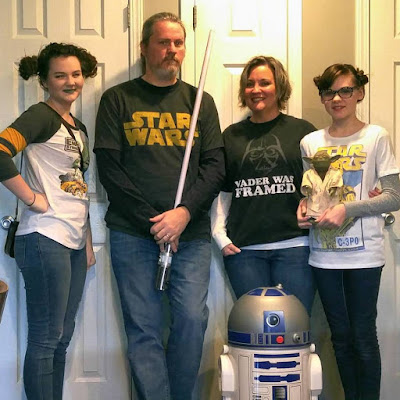 We walked into a sold out show and sat down. Twenty-five ads and trailers later, the lights went down. The Lucasfilm logo came up followed by those famous words, that music, the scrolling letters, then...two hours and sixteen minutes later it was over and what a freaking ride. The acting is outstanding. The character development is outstanding--even that bad guy is conflicted which was awesome. There is some cheese, but it's Star Wars, right? Nods all over the place to the old and newly opened doors for what is to come. Joy.

JJ did do it, Patton. He really did. Return of the Jedi?

It is beautiful. Gone is the polished and cartoony look of the prequels--these worlds are real, and there were a few strong images that will haunt you. Han's bickering with Chewie. Leia's bickering with Han. The old cast fell right back into their roles like they were slipping on a comfortable pair of jeans. The new cast more than held their own and stole a lot of the scenes. Finn and Poe and Rey and BB-8 and all of the new characters fit in that world just fine and you will be glad they are there. The creatures were a mish-mash of mostly practical badassery and some expert-quality CG. The dogfights were cool and everything reminded me of the movies of old (again, episodes 4, 5, and 6). The lightsaber duels rocked and the Millennium Falcon is still the fastest hunk of junk in the galaxy. The new bad guys (and girls) are wicked and Kylo Ren's ship kicks ass. Wow.

Episode 7 is a perfect mix of old and new and when it is over, you want to continue on the journey with them.

It's laugh-out-loud funny, edge-of-your-seat thrilling, rip-your-soul-out sad, nostalgic, forward-looking and exactly what it needed to be. Never has a movie with so much hype and so much riding on it exceeded my expectations. Yeah, yeah, it's just a movie...but if kids today are still talking about it when they are 43 and forcing their kids to watch it on whatever the latest TV/Streaming technology is at the time (and I think they will be), then it is more than a movie right? It has always been more than a movie.

You don't have to have seen the original trilogy to appreciate this installment on its own, but you should watch episodes 4, 5, 6, and then 7 in order to get the full effect.

I've toiled with this next part ever since the credits rolled, but here's my official order for the Star Wars films:

1. Tie between Empire Strikes Back and The Force Awakens. High Praise? Hell yes.

2. A New Hope --This was the hard part, because it started here and there are a lot of similarities here...but the truth is, episodes 5 and 7 are just more well crafted and better films.

3. Return of the Jedi

And there is a huge gap between Jedi and Sith.

4. Revenge of the Sith

And there is a huge gap between Sith and Clones.

5. Attack of the Clones

Go see it. You'll like it and if you don't, maybe you never had the urge to make blaster noises with your finger, or lightsaber noises with a cardboard tube, or wookiee noises when it's quiet, or breathing sounds through your mask, or when you're by yourself in your car and the stop light turns green, shout, "Lock S-foils in attack position." And that's okay, but if you try it, you might like it.

So JJ made successes of Star Trek and Star Wars? I know George Takei is proud. I hope George Lucas sees the err of his ways although I still thank him for bringing his world to our world. May the force be with us...always. 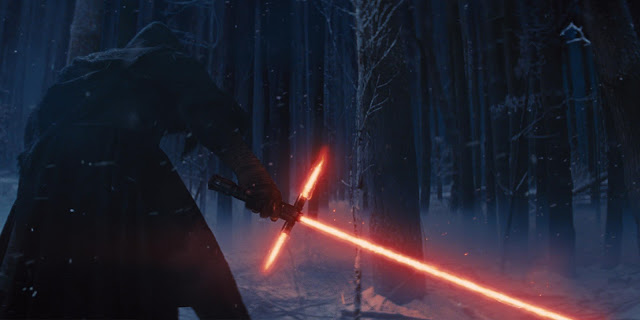