You probably know Maria Olsen as the casting director from the fabulous Starry Eyes...or maybe as the Fury from Percy Jackson and the Olympians:  The Lightning Thief. If you don't know her, you will because her IMDB page is simply one of the busiest I have seen and her MOnsterWorks66 production company ,who teamed with ACH Reunion for this film, is cranking out product like a wood chipper cranks out blood and bone fragments:  in bulk.

So when she asked if I would review REUNION (lil' ol' me?) of course I was excited.
Thanks Maria for the screener and for the opportunity. 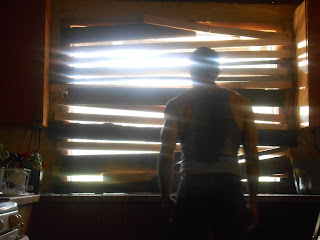 Written by Brett Havird and directed by Shawn Chou, this film is about a mental patient named Mia (Maria Olsen, Starry Eyes) who hears voices that tell her to do nasty things. She escapes from the hospital and winds up at the house of has-been rock star Brad (Jack Turner, Stitchers) ,who has issues of his own, and Carly (Sarah Schreiber, Agent Carter), the very person who was providing Mia's medical care. 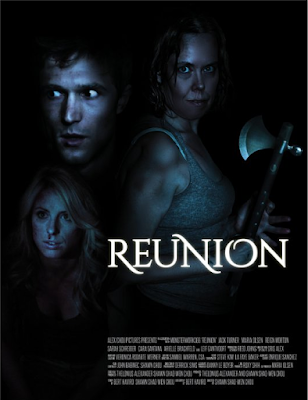 Mia takes quick control of the situation, including Brad's friends Grant (Reign Morton, Whitney) and Tamryn (Cara Santana, Salem) and the bodies begin to pile up. She is convinced that Brad is her abusive husband and that he knows where her son is.

Twists and turns abound and there's plenty of gut-wrenching pain for Brad and friends before it is all said and done. I promised I wouldn't give any spoilers so I won't...I'll just stick to the performances and the technical aspects.

Overall, I liked the film, but it had some quirks that I wish it hadn't. I'll get those out of the way first.

I'll start with the sound. I screened this online so it might have been the Vimeo feed [Update- 13SEP15:  It turns out the sound issues were with Vimeo and not with the film. So bad play, Vimeo.] but the sound for this film left a lot to be desired. Some sections were so muddled I couldn't understand the dialogue. Some sections where there should have been music, I could barely hear the music. Sometimes the effects on the voice were so strong, the words were lost. For example, Mia's voice in a scene where she has Brad handcuffed to a bath tub used so much reverb, she was difficult to understand. Not the actor's fault...and that bathroom was small, so that much effect was overkill. This problem was sporadic, but it was definitely there and enough to pull me out of the movie. 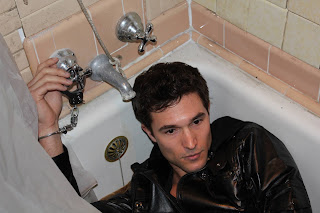 The other issue was in the telling of the story. This is an interesting tale, but it seemed to be overly complicated. There are flashbacks and voices and it jumps from place to place. Sometimes it's obvious we've shifted and sometimes it isn't. That made parts of this film confusing to follow.

The other story aspect that bothered me is that there were a couple of characters in the film that served no purpose other than giving Mia someone else to kill.

The overall story was good, just sloppy in places...it could be tweaked for some more oompf.

Now, for the good parts. The cast was solid and led with menace by Maria Olsen. It is really Mia's film and Olsen shines as the unstable antagonist. The character is creepy as hell and you never know what level of crazy she is going to display when she comes on screen. Brad and Carly played well as the young couple struggling with their relationship, Brad's music and his need for medication (that's all I will say about that). There was some melodramatic cheese in there, but I'll let that slide. 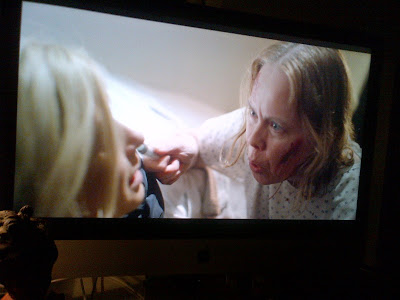 Grant and Tamryn show up midway to try and coax Brad back into the band. There's a record deal on the table and Grant wants to take it. This causes more pain between Brad and Carly and Tamryn, Grant's "stripper girlfriend" only fuels the fire.

There were excellent performances by the cast of the flashbacks. This is where the real story gets told. I wish there had been more of that. 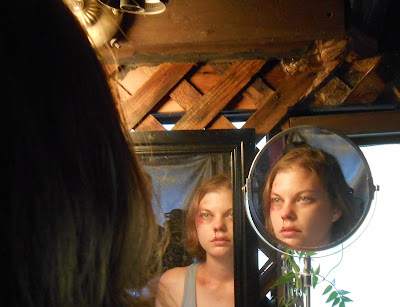 The gore was low, but the ick factor was pretty high. Mia only kills a handful of people, but they are fairly brutal. She is obviously tormented and doesn't really want to be the monster, but she can't help herself.

I'll list some grocery items here and you let your imagination go:  syringe, taser, axe, bleach. Yes, she killed someone with bleach. Now I have to go watch Heathers.

The effects were all practical and realistic.

The camera work was very nice so no complaints there.

If you're a fan of thrillers where a psycho escapes the nervous hospital (to quote Carl from Slingblade) and lays waste to the unsuspecting, you will have fun with this movie. If you're a stickler for the technical aspects, approach with caution, there are some hiccups.

Overall:  3 out of 5 skulls
* (9-13-15) So Vimeo's encoding apparently muddled the soundtrack on this one. Clean sound would likely push that score into the A/B range, and that will raise the score for this film. Give it a watch!