One Vision of Hell

“This will only hurt a lot,” he said. He was sweaty, greasy and covered with blood. He held the knife, a large thing; something like John Rambo might carry into the Vietnamese jungle, up and twisted it in the light. It glimmered along its edge, sharp enough.

The man he spoke to was named Kevin and only a few hours before, Kevin had been an accountant. He was good at his job, he was moving up, his family was secure and happy. Now, Kevin was screaming through a gag. His eyes were wide and he was also sweaty. Not as sweaty as the man with the knife, but stinking nonetheless. 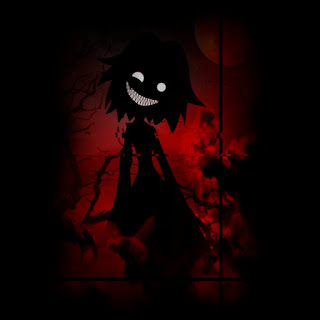 Kevin’s bladder let go as he continued to plead and bleed. The knife had poked him in a half dozen places and sliced him on the back of his ankles and in the crooks of his knees and elbows.

“I need your skin, that’s all,” the knife man said. “They make me do this.” Then the knife man wretched and vomited on the floor. “It’s nothing personal, you understand. You do understand, don't you?”

Kevin writhed and screamed even harder into the gag. The knife man giggled. It was an uncomfortable, insane sound, not happy laughter. Not just heard a joke laughter. He rubbed a blood-stained hand across Kevin’s forehead and then knelt down so he was face to face with his victim. The stench of sour sweat and vomit invaded Kevin’s nostrils.

“I wouldn’t do this normally, but it’s my sentence, you see. I would never hurt anyone if they didn’t make me. But they make me.” The knife man’s eyes were pleading, his brows raised seeking commiseration. He smiled. “It’s not me.”

He sighed as the knife slid in at Kevin’s left hip bone, then across below his belly and to the other hip bone. Kevin screamed before he passed out. The knife man rolled Kevin over in one great heave and continued the cut around the former accountant's side, just north of the buttocks and across, meeting the original cut. Blood spilled in sheets. Grabbing the bound wrists, knife man held them up and hung them on a hook that was attached to a chain that was attached to a winch. With the flip of a switch, Kevin raised into the air and dangled there like a Christmas ornament. Things spilled out from the massive wound, the skin now looking more like the tails of a shirt that should have been tucked in.

Knife man began a new cut, starting at Kevin’s left armpit. It continued across the collar bones to the opposite side, then around the back and across the shoulder blades. He wretched again, but containing himself, he walked around to the front and stuck the knife into Kevin’s neck. The accountant’s body twitched, but remained silent, the last few drops of blood leaking in spurts as his heart died. The knife slid easily down between the nipples, past the belly button and into the groin where it stopped.

“This is always the worst part,” knife man said. He dug the fingers of one hand under the skin and sliced it free as he pulled with the other, tearing the flesh loose in a sheet. Kevin’s body swung violently as the killer tugged, but eventually he was left part man, part skeleton, hanging like a side of beef in a refrigerator.

Knife man carried the man-hide to a bench that hugged the wall in the back of the room and flopped it down on the counter. He measured it and smiled. “Big enough.”

With a razor and straight edge, he sliced a strip from the longest side and left himself with a piece of skin about thirty inches square. Knife man found some brass grommets and a tool in a box on the one shelf. The tool looked like a hole punch used to put paper into a three ring binder, only it was larger. With it, he fashioned holes around the perimeter of the skin and then placed the grommets in the holes, crimping them in place.

On the other corner of the room, there was a hose. He hung the skin on a pair of hooks—bloody side out—and washed it clean. Then he rinsed the gore and vomit from the floor into a drainage trough in the back, finishing the job by taking a drink from the hose, swishing it around and spitting into the drain. Satisfied with the look of the terrible room, knife man grabbed his prize and slid opened the great metal door with a creak of its gears.

The next room was filled the noise of a crowd. Shuffling feet and voices in various stages of conversation, taunting, arguing and laughter filled knife man's ears. It smelled of cigars, cigarettes, sweat, perfume and alcohol. Knife man pushed his way through the mingling bodies and across to a stage that was lit by torch fire. He stepped onto the stage and held up the skin. The crowd silenced momentarily and then applause roared from the things that stared back at him. There were more than one hundred of them. They had tails and leathery wings and fangs. Their skin tone ranged from snow white to black so dark, it was hard to see.

Knife man knelt next to the bass drum and loosened the bindings that held on the broken skin. He tilted it back and laid the new one across the large round opening—courtesy of Kevin—and began clipping the bindings through the brass grommets. He tightened them in a star pattern as he was shown way back in junior high school until the skin was taught and gave a pleasant thunk when tapped. A few more tweaks tuned it and he set the bass drum back down and slid its pedal back into place.

The hammer man, so called because he used a hammer to finish his victims, stepped onto the stage and grabbed the upright bass that leaned against the wall. The strings gleamed in the torch light, but outside of the tuning pegs, they weren’t strings at all. They looked more like tubes or condoms, more like intestines.

A few taps of the bass drum pedal and an adjustment here and there, and knife man was comfortable again on his throne. The demon patrons screeched with pleasure and the glasses of blood and whiskey flowed once again. Hammer man began a walking bass line of the hottest evil and knife man crashed the cymbals and followed hammer's lead. Scorching jazz bloomed and filled the room. Slowly, the rest joined them. Hell’s own house band filled in with horns and rhythm guitar and finally a sexy woman in a slinky dress who crooned with a forked tongue while the monsters danced.

“Whatever it takes,” Kevin said. It was what he said when he signed his deal. He knew hammer man and the fork-tongued woman had said much the same. “I want to be the best in the world. The best ever. Never forgotten.”
Email ThisBlogThis!Share to TwitterShare to FacebookShare to Pinterest
Newer Post Older Post Home