I hate doing film reviews. I find things I like about movies and things I don't like about movies. The takeaway here is this:  making movies is hard. Anyone that pulls off a feature length film gets my respect, even for the worst of films. So this may sound review-ish, but it's more of one dude's opinion and shouldn't affect yours.
That said, a movie like Jurassic World was going to happen. I mean, if the entire crew (and it's a huge crew) had quit, the studios would've found another crew and pressed on. And most times when you toss the GNP of many small countries at a project, the end result will be something. At least it will be a professional looking piece when all is said and done.
So, I applied some odd thoughts to Jurassic World. I went in thinking, okay, take away the budget. Take away the glam and the sexy outer coating. What's left? 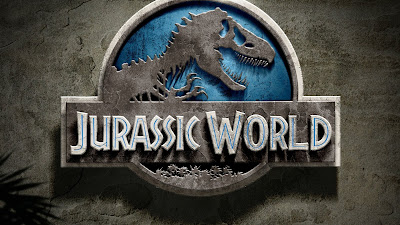 A cheesy drive-in monster movie is what's left and this is in no way a bad thing. The effects were stellar. The excitement was there and at times the tension was so thick I could taste it. There's just something about people being terrorized by dinosaurs that makes the heart race.
I had a lot of fun with the cardboard people and the plot that was basically the first movie all over again, but where were the characters? You know, the personalities? I missed Goldblum. His particular brand of weird would have helped, and I think it may have been necessary to make the film memorable. Not him specifically...but someone. Here's the one thing that bugged me. They had Chris Pratt (a personality) and Vince D'onofrio (a HUGE personality) who both do over the top very well and well...I felt like the human beings were restrained (caged) while the dinosaurs were loosed to do as they pleased. That's kind of the point, but still...

After the popcorn was gone and I was in the car on the way home, I just felt a little let down.
Like Ian Malcolm said in Lost World... "Yeah. Ooh. Ahh. That's how it always starts. But then there's the running...and the screaming." 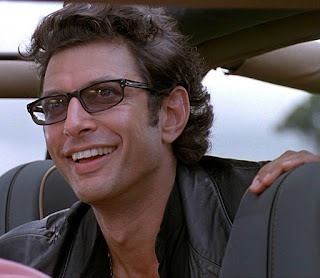 JP4 had ooh and ahh and running and screaming...and many nods to the original.

Am I supposed to believe the park would actually allow people to kayak down a river with brontosaurus and stegosaurus right along side? I know, nitpicking. Not fair in a popcorn munching action film, right? But if you're going to do that, how come none of those civilians got stomped on in a stampede? I'm a firm believer in this:  if you're going to commit the suspension of disbelief sin in a movie, make it pay. Brontosaurus would step on people and not even realize they were doing it.

Too many baddies. D'onofrio was a baddie, Bryce Dallas Howard was sort of a baddie, the diva scientist from the original move is back...still a diva, still a baddie. Then you had the Indominus Rex! Plus the raptors--well, some of them. Sort of.

You know, I totally forgot this movie was about the kids...that's probably a bad thing.

And I'm supposed to believe that this new DNAsaur understands that she is carrying a subdermal tracking device? She just understood modern technology and knew to rip that thing out, huh? Cool.

Come to think of it, the thing that I felt was the smallest stretch was the training of the raptors. That felt pretty real to me (at least at first). By the time the big finale came along, I just didn't care anymore. I was about eight years old again and staring and munching popcorn and giggling with the other eight year olds.

If they make a fifth (as if that's even a question) will I go see it? Yes, but there's just something missing. Vulnerability, maybe. Indiana Jones was afraid of snakes. Han Solo had a bounty on his head. Dr. Grant was afraid of commitment and having children. Rocky didn't wanna be no bum. Jack Burton narrated his own life-big ego, big heart. Batman lost his parents. Nemo had a gimpy fin. All of these characters I can describe in great detail. They have weight and they last in your memory.
Tell me about the characters in Jurassic World.  Pratt was in the Navy. BDH what? worked too much? Was a bad sister? Okay. The rich guy that owned the place was...rich? The diva scientist was exactly the same character from 20 years ago. His character hasn't arced in 20 YEARS!

Nitpicking. And even with all that bitching ^^^^ up there. I don't care.

It's dumb in a grand adventure sort of way. Sometimes you need to check your brain at the door and just give in to the spectacle and this is exactly that movie. Don't believe me? Look at the ticket sales.

Action sequences. Dear Michael Bay-- take notes. This is how you stage blockbuster action. Also--Dear people who make superhero movies--notice how the end sequence didn't overstay its welcome? Yeah, like that.

Bringing back the T-Rex to save the day may have been my favorite part. It just seemed fitting.
Email ThisBlogThis!Share to TwitterShare to FacebookShare to Pinterest
Newer Post Older Post Home