Today, aside from shoveling a foot of snow off the driveway, I was treated to a pre-release screener of the upcoming horror flick, HEADLESS, from Gentleman Monster Productions and Forbidden Films. 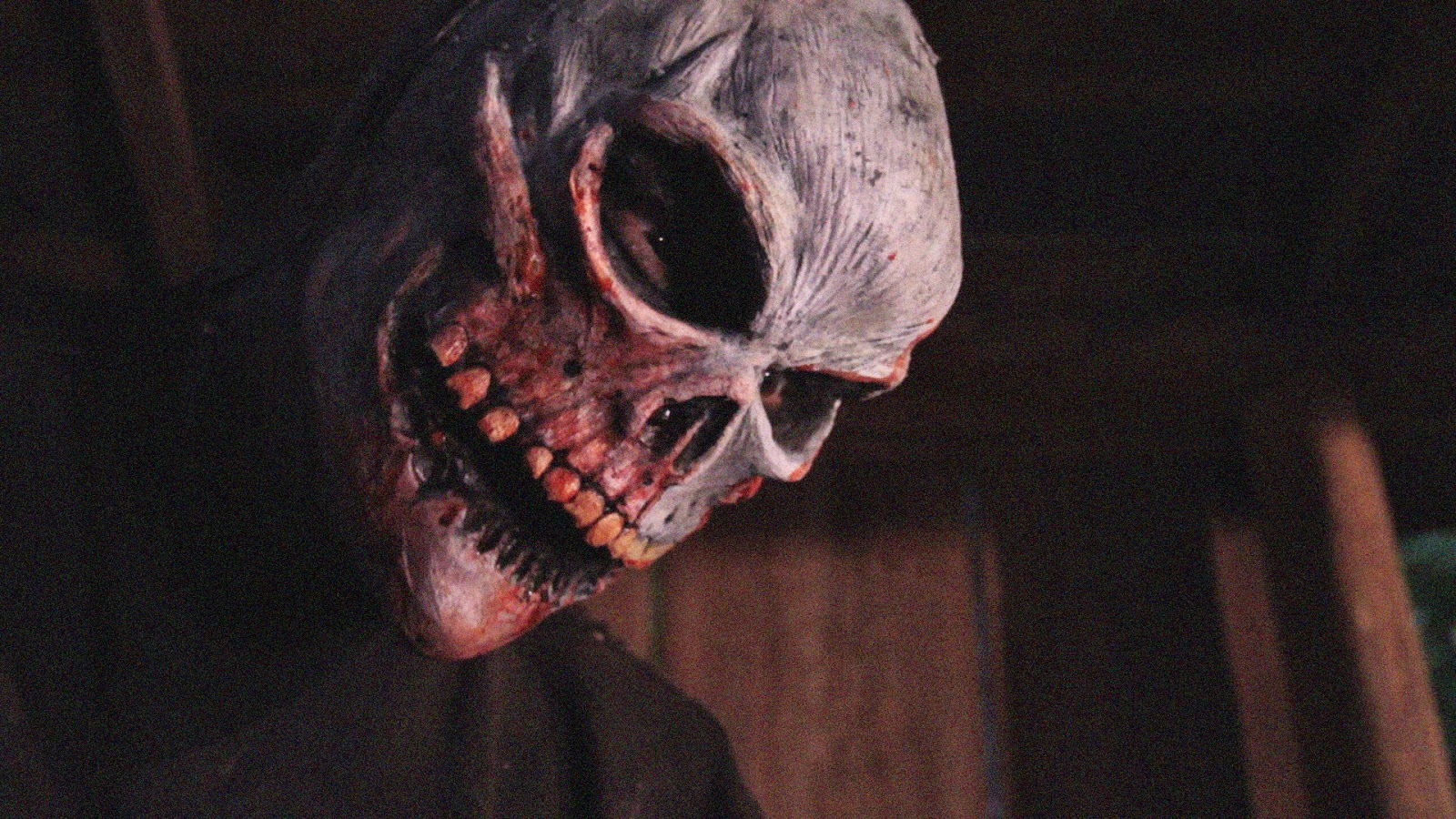 I’ll steer clear of any real spoilers, since the world premiere isn’t until February 28th (for links to most current showings scroll to the bottom of this article), but if you've seen FOUND, your gut already tells you where this one is going. 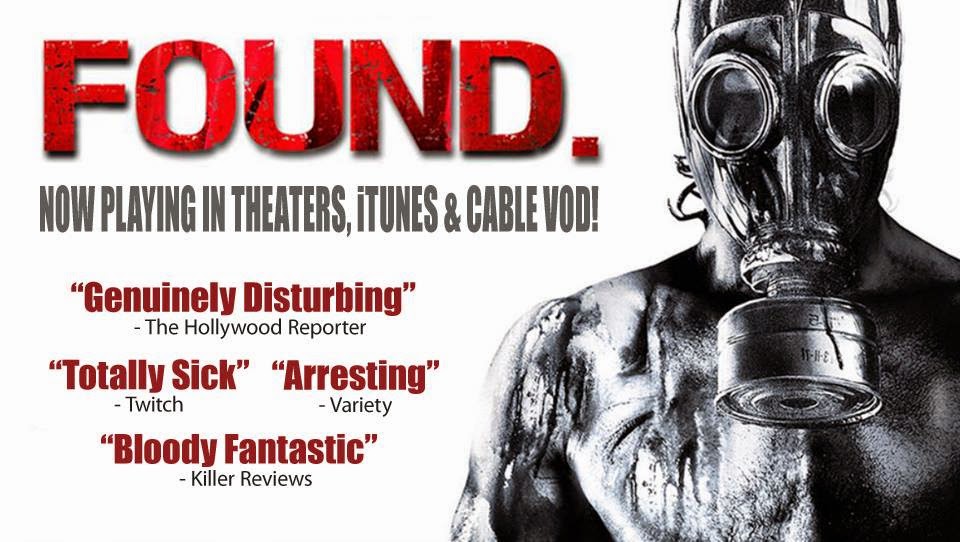 HEADLESS is the "lost slasher film" hinted at during some of the more diabolical scenes in the movie FOUND. If you're a horror fan and haven’t seen that one, you’re doing yourself a disservice. It isn’t required watching in order to enjoy HEADLESS, but it definitely adds to the experience, so grab a copy of FOUND or hit it up on demand right now.

Written by Nathan Erdel and Directed by Arthur Cullipher, HEADLESS is presented as if it was actually filmed in 1978. The retro titles at the beginning are fantastic and before the feature starts, you are treated to a trailer for another film entitled “Wolf Baby” which is funny and very reminiscent of the time (and this guy hopes it also gets the feature length treatment). The colors are warm, if not a bit off, and the film grain is there along with scratches and those little hairs that bounced around the screen back in the day. So much Jordache...Groovy. 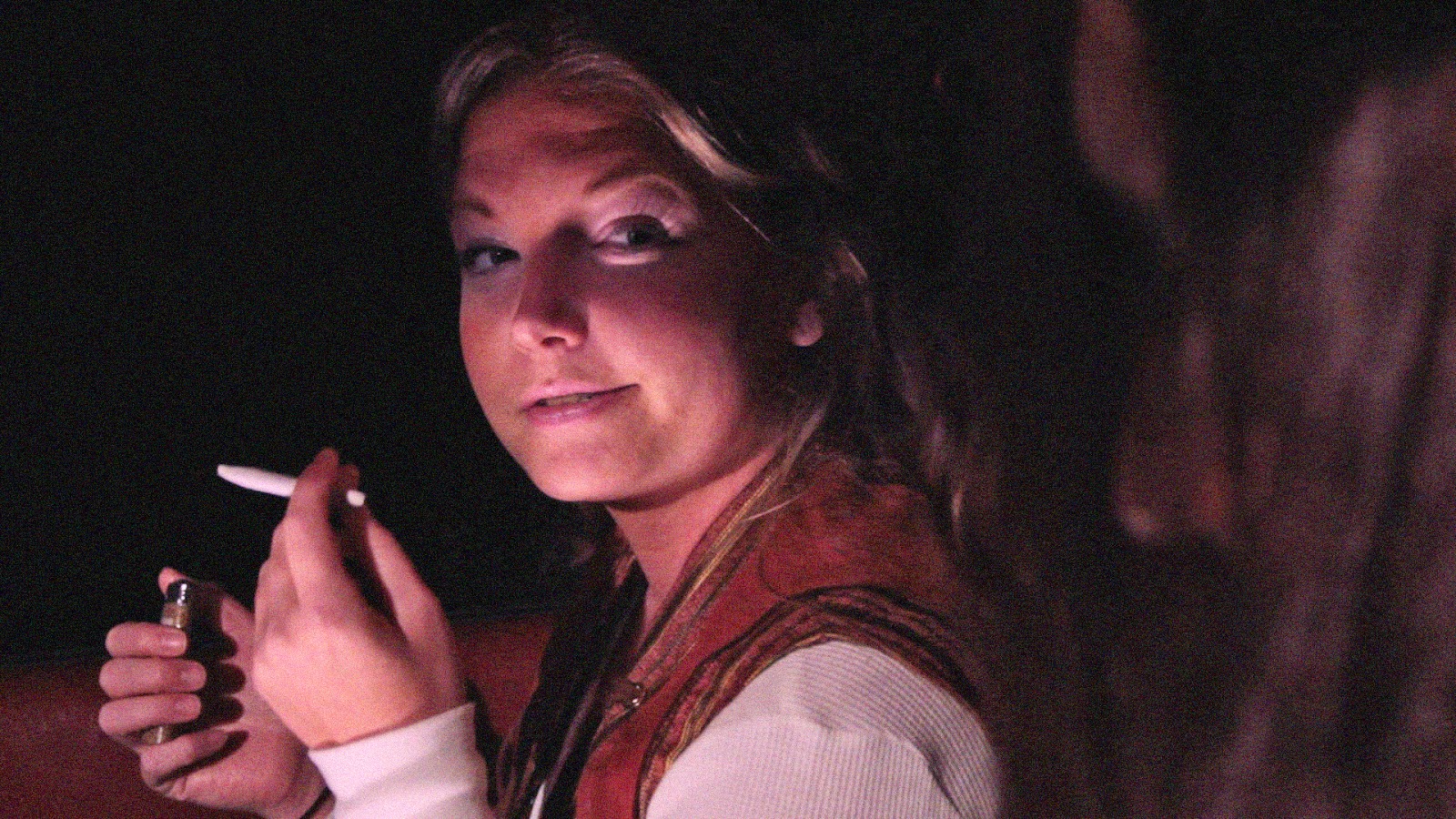 When the film starts, we meet the maniac known only as “The Killer” and are treated to a recap of the scenes shown in FOUND.

He dresses in black, wears a creepy skull mask and has quite the modus operandi...to describe it in detail would be uncool. Just know that the ice cream is a machete head removal (hence the title), the whipped cream is cannibalism and the cherry on top is necrophilia. If you and your lunch are easily separated, you might wanna sit this one out, or bring a bag to yerk in. I myself was right at home with a steaming plate of nachos. 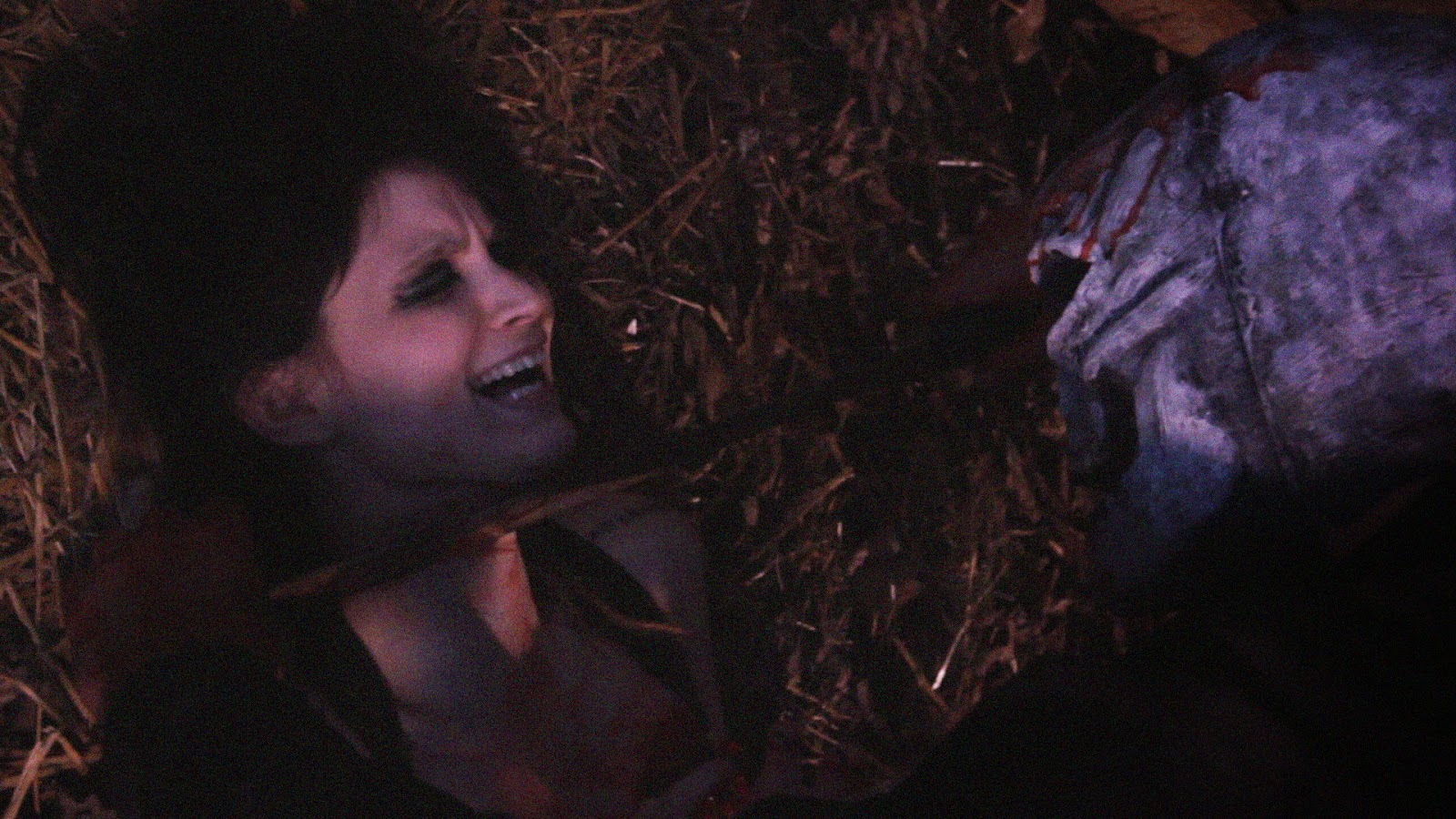 It is blissfully in your face and the camera lingers on the gore, never shying away.

Once he is done, he totes the victim’s head in a bowling ball bag back to his dilapidated shack and places it on the shelf with the rest of his trophies. Our killer's body count is massive. Then he cries and takes a nap. 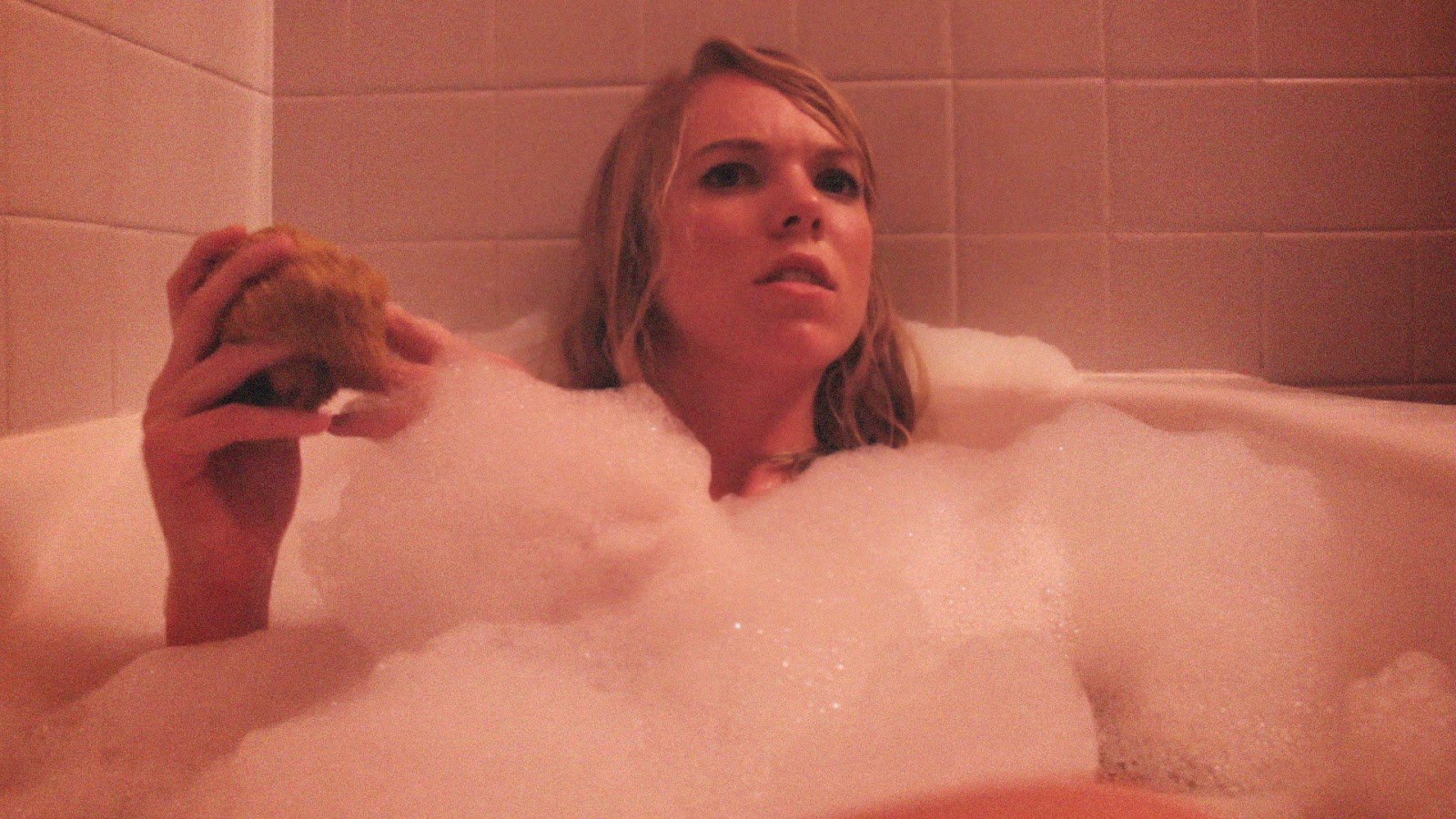 She hates her job, but someone has to make dat money because her boyfriend, Pete (Dave Parker) is in a band with buddies Maggot, Roach and Spider. He's a --gasp-- musician and a douche bag. 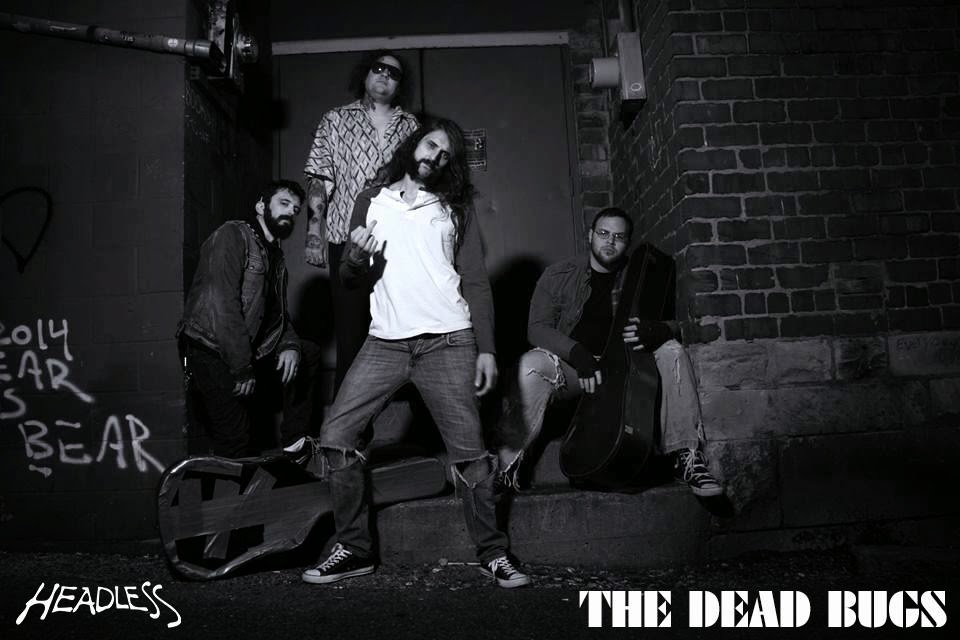 The band sucks, but Pete is all about his crappy music...and smoking weed...and getting drunk...and smoking weed. Slick Vic (Brian Williams) is pure 70’s sleaze. He’s rude, crude, and after hours he bangs Betsy (Ellie Church) while she’s still in her skates. Nothing gets women hot like rented footwear. 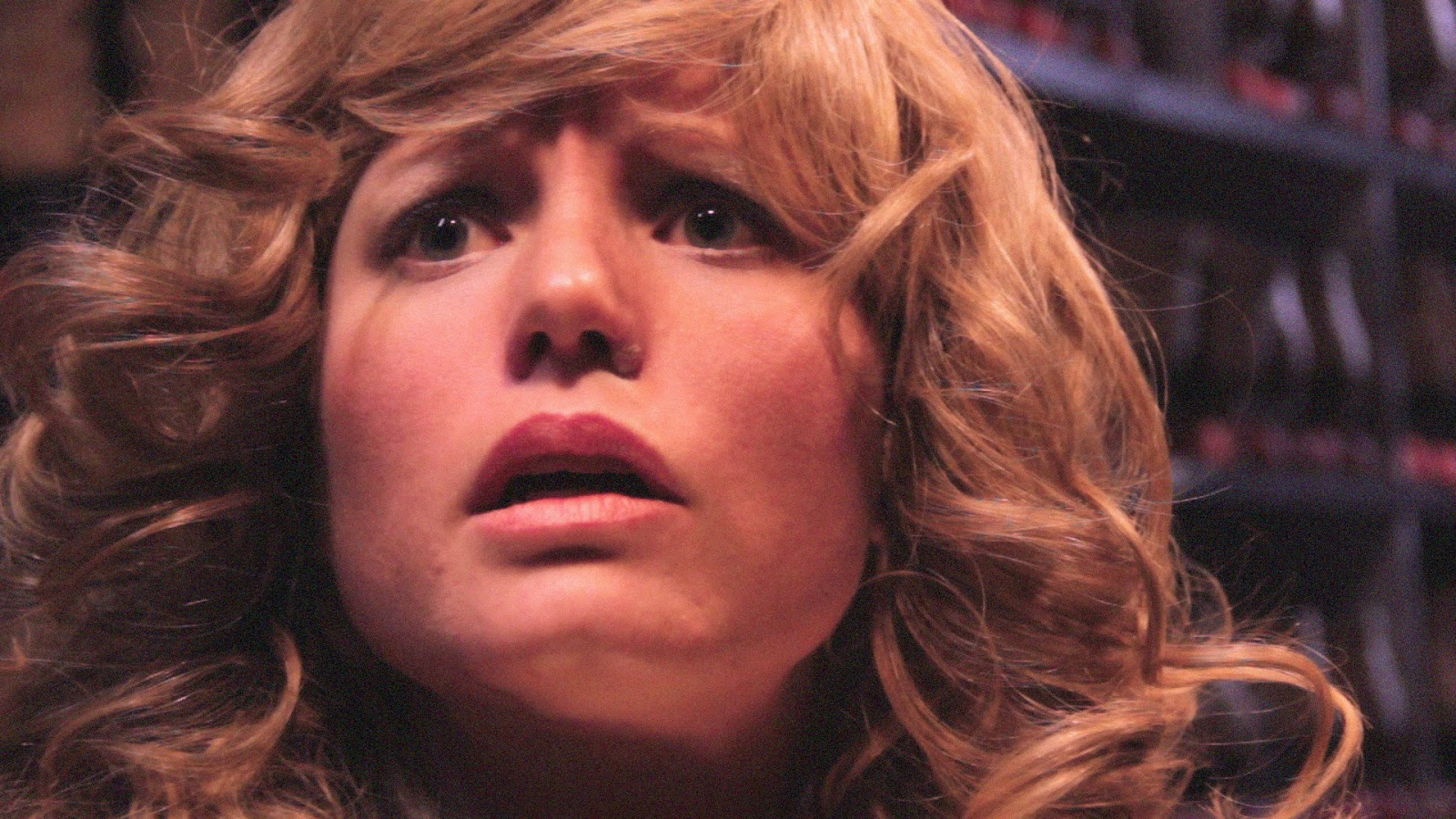 Jess’s problems with Pete compound throughout the story...but we’ll get back to her.

The Killer, played with madness and conviction by Shane Beasley, has flashbacks and nightmares about his childhood. His mother (Emily Solt McGee) is bitter and she blames the boy for his father leaving. She calls him a monster and keeps him in a dog kennel. Parent of the year, right? His sister could pity the boy, bring him food or comfort him, but she is no better.

The film builds, alternating between The Killer’s present exploits, his horrible past, and Jess’s jacked-up life. Something has to give. It is well paced, so you’ll never be bored. I won’t spoil the end...just know it is worth the wait. 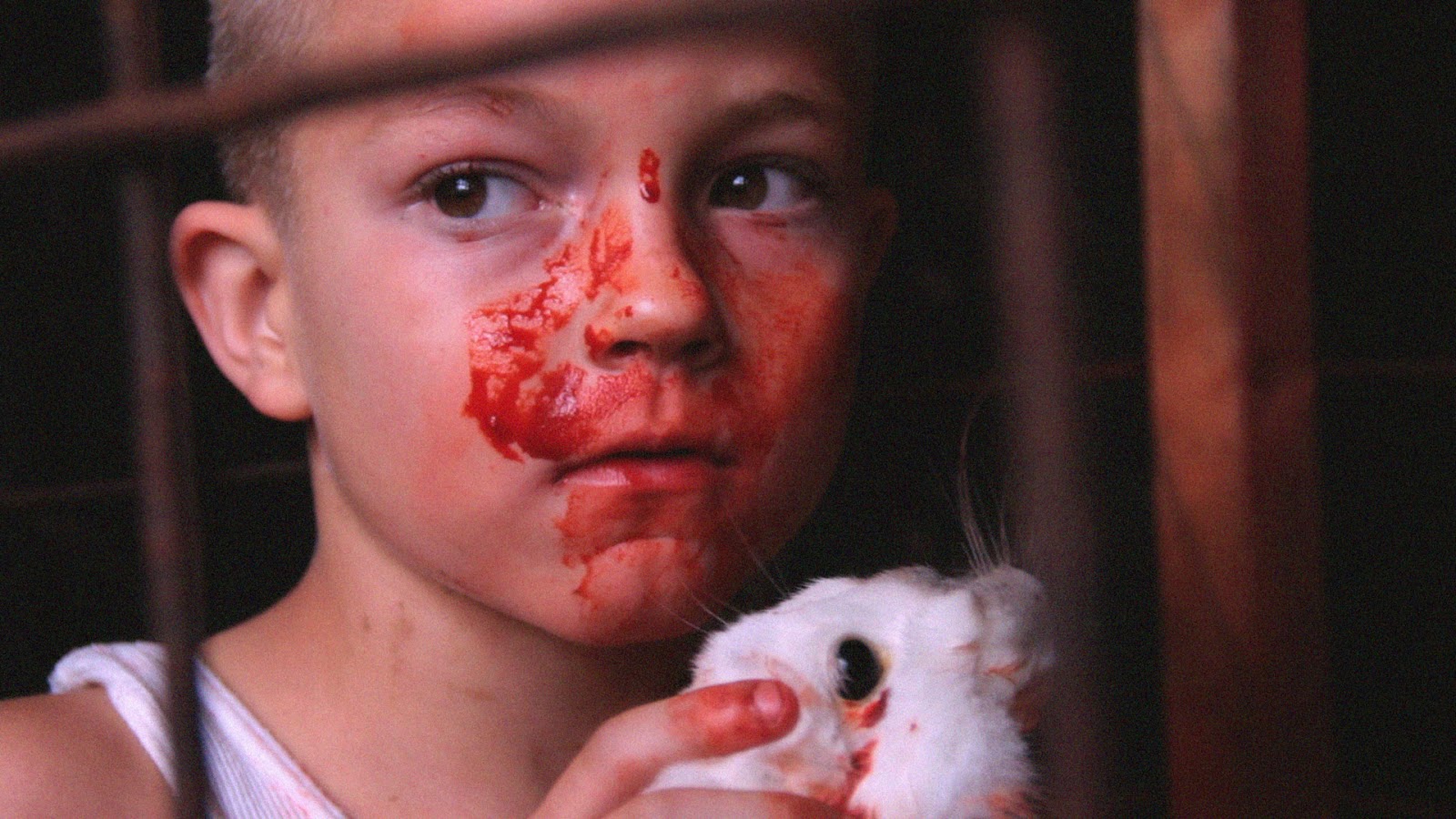 Keeping true to films of the time period, there are plenty of boobs, drugs, blood and viscera...heads off to the effects crew (see what I did there?) for some killer practical work. It really pays homage to the video nasties of the late 70’s and early 80’s but goes so much farther than any of those films. This one will be banned. It will be talked about in undergound, seedy internet chat rooms. It won't win any feminist awards and it will be scoffed by the straights...but fuck the straights. HEADLESS makes no apologies nor should it. 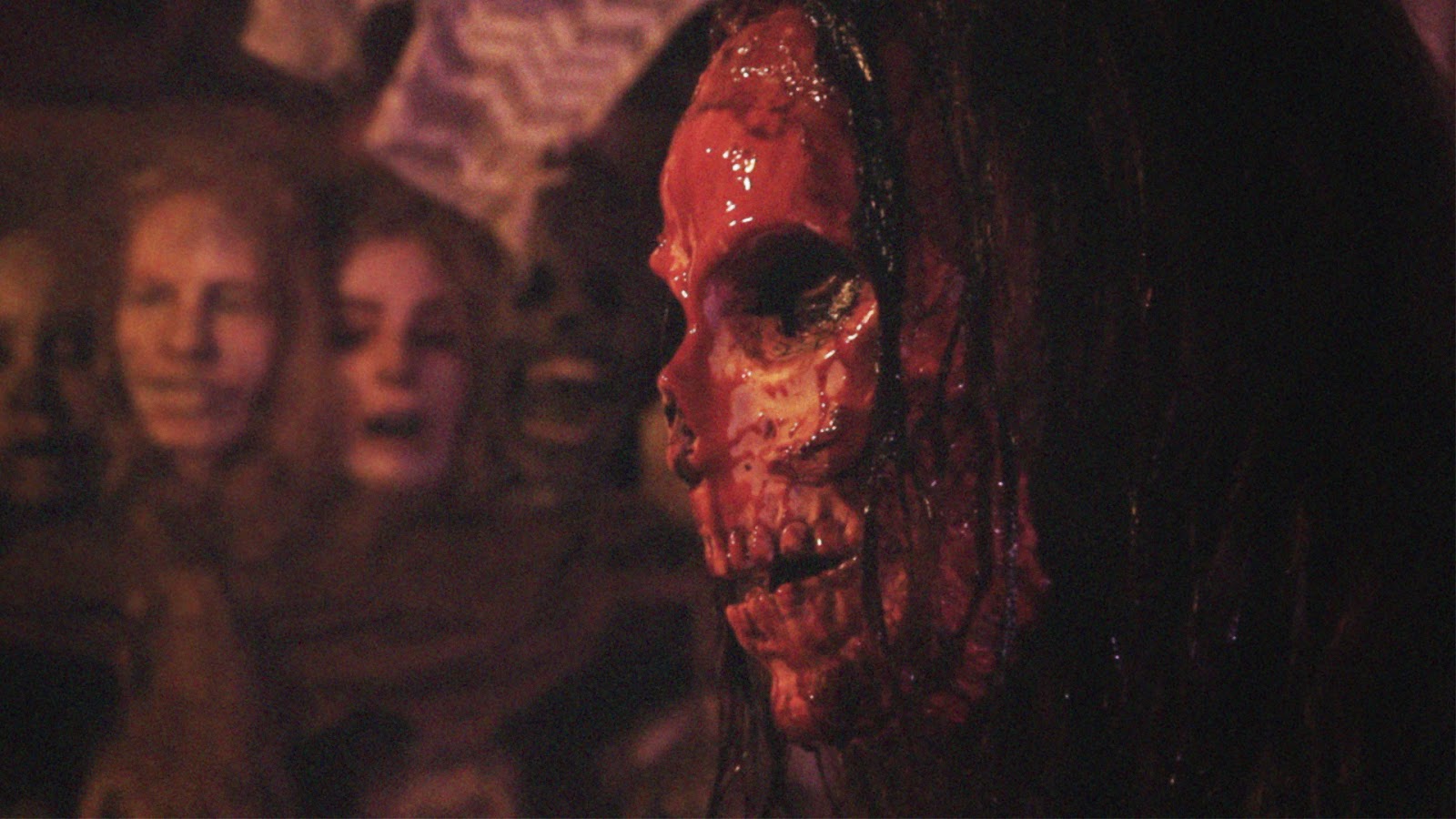 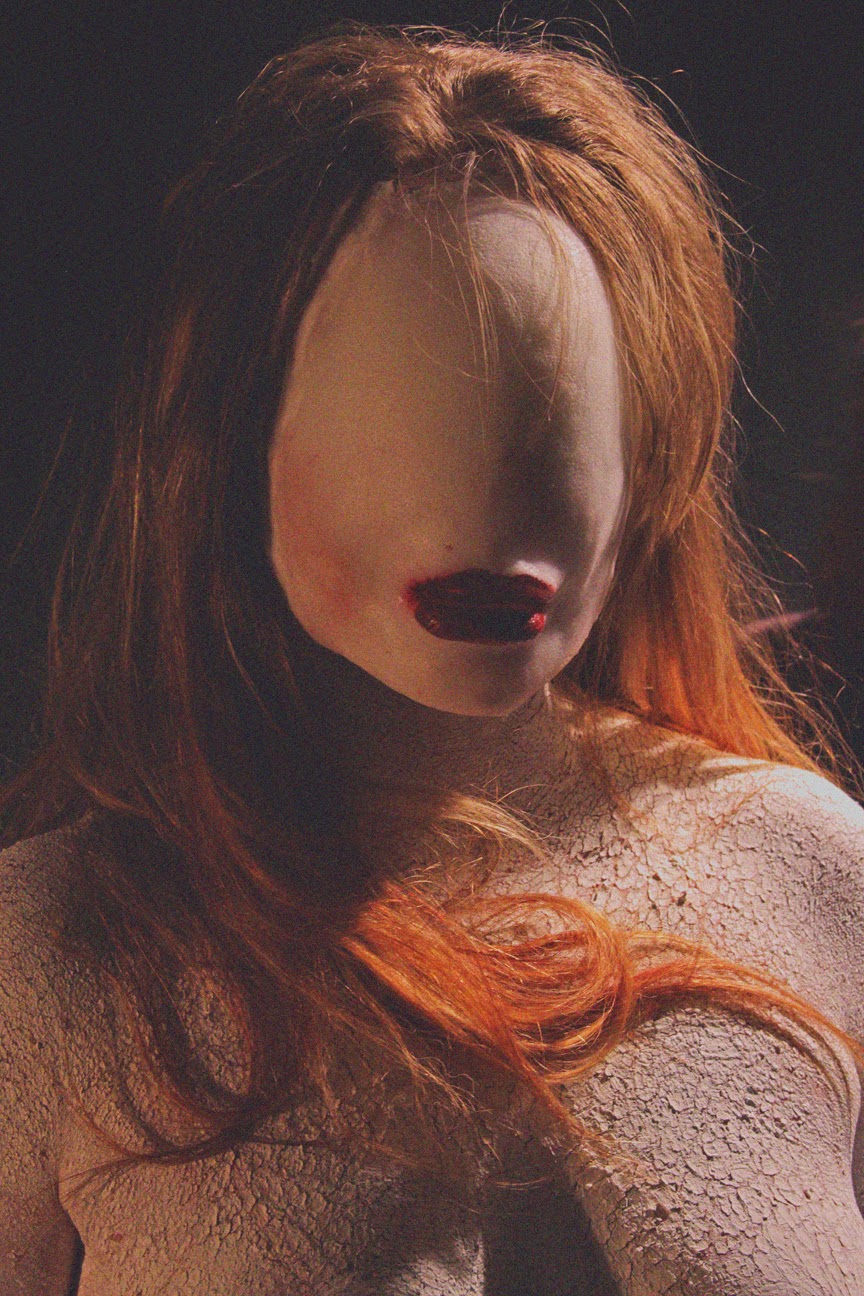 So we have nudity, we have gore...but WAIT! There's more! What stood to me was the character development of The Killer. You almost feel for the guy even though he’s a vicious bastard. We see the moment he snaps as a child and the “Skull boy” (Kaden Miller) appears. Skull Boy is a reflection of who he is to become, his calculating side that leads the beast from murder to murder. We see him grow up in the cage and the torment to which he is subjected. We see the inevitable explosion when he’s finally had enough and mom and sister have to go.
There is this transformation that happens to the killer and it culminates at the end of the film in an eerily poetic way. It's evil as shit, but it was comforting to see that some thought went into the story even though this is--at the deepest part of its coal-black soul--an exploitation film and a gorefest. 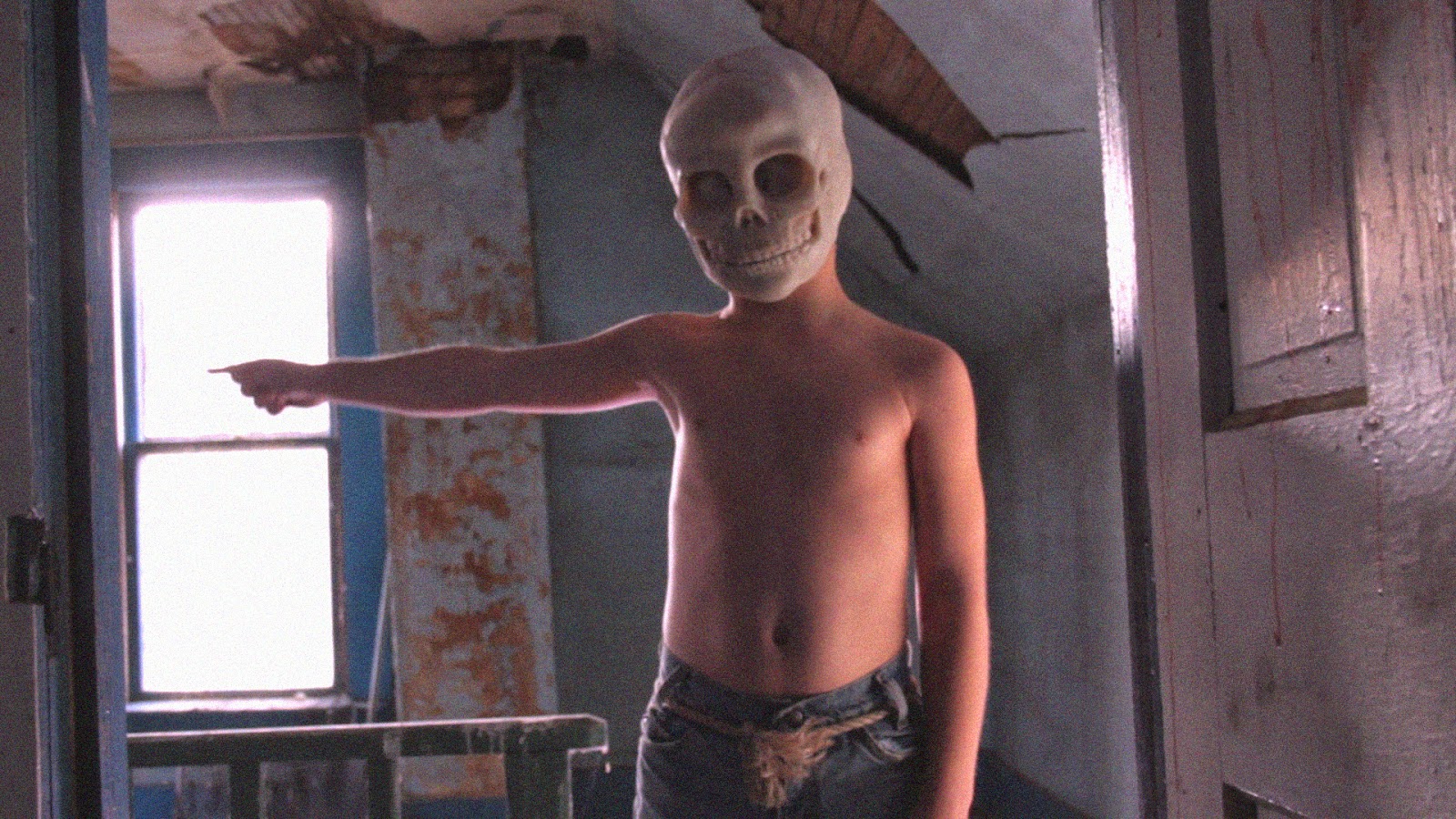 Acting :  High marks to Shane Beasley. It is quite a performance. Also high marks to Kaden Miller as Skull Boy. There’s something to be said for that looming, unspeaking character. He reminded me of Sam from Trick-r-Treat. That childlike innocence in his movements makes it all the more terrible. And the clack of his skeleton jaw was a nice touch. Great job all around. 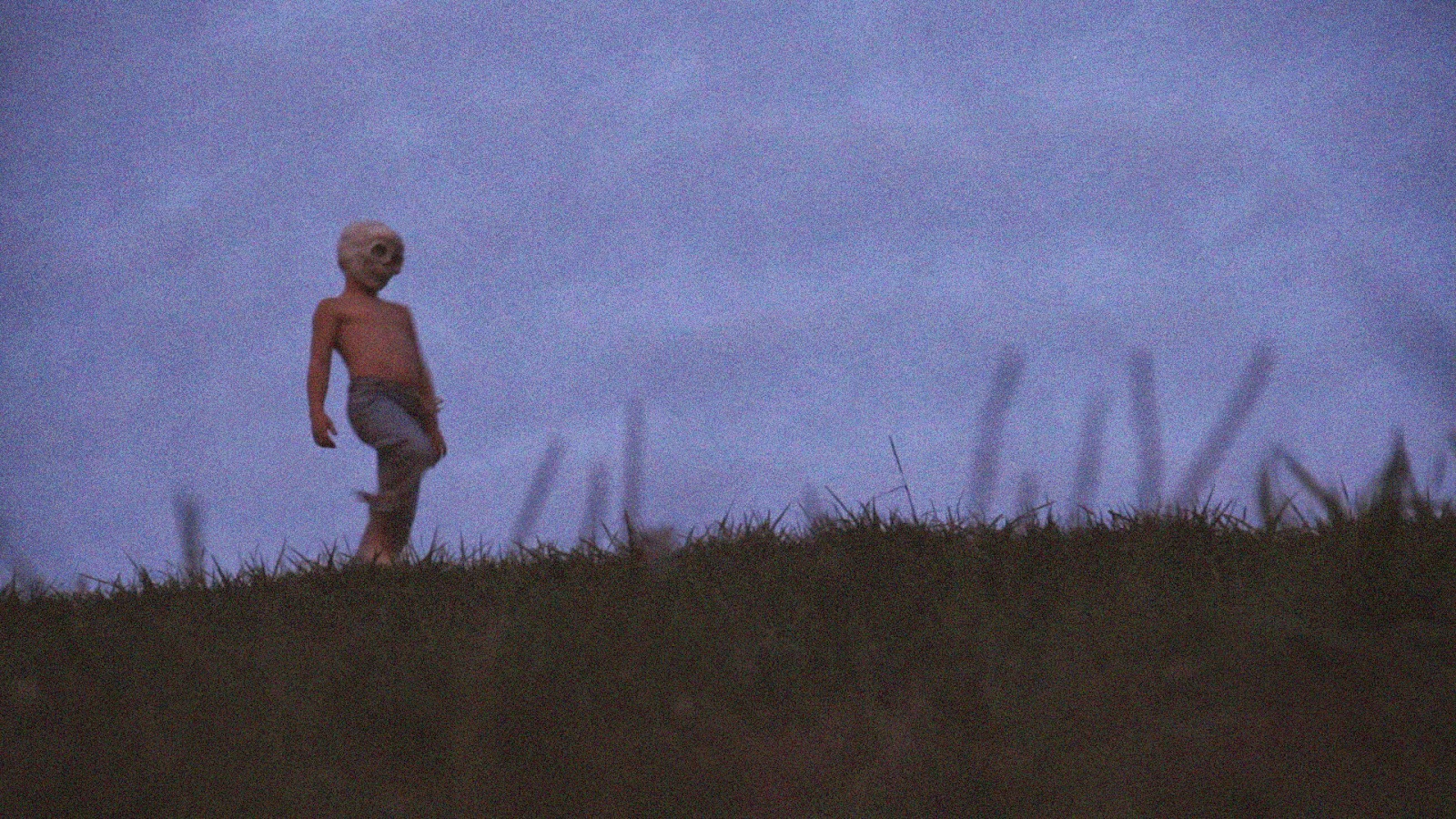 Visuals: Great work. DP Leya Taylor nails it. A grungy, real world feel that the films of the 70’s had in spades. There isn’t a hint of that glossy, computerized sheen that all films seem to have today. I was glad to see it. The effects were spot on, gooey and plentiful and there are some truly disturbing scenes in this movie--that from a 30+ year veteran of the horror film, gorehound and writer of horror fiction.

Sound: Excellent. There were moments where the lip synch was off, but I suspect that was also in homage to these older films along with the scratches and the places where the “film reel” had a “bad splice”. If it wasn’t intentional--I won’t tell if you don’t :)  Also a stand out were the original tracks which included “Headless For You” and “Outta My Brain” by Sweet Teeth and “Heads Will Roll (On the Disco Floor)” by Victoria D and Andy D.

Story: Screenplay by Nathan Erdel. Direction from Arthur Cullipher...These two tell a good story. It isn't a pleasant story, but the transformation of The Killer from a boy into the full fledged monster his mother always claimed him to be was very cool to watch. Bravo for giving a film with balls some brains as well. It will give the slew of upcoming sequels something to build on. 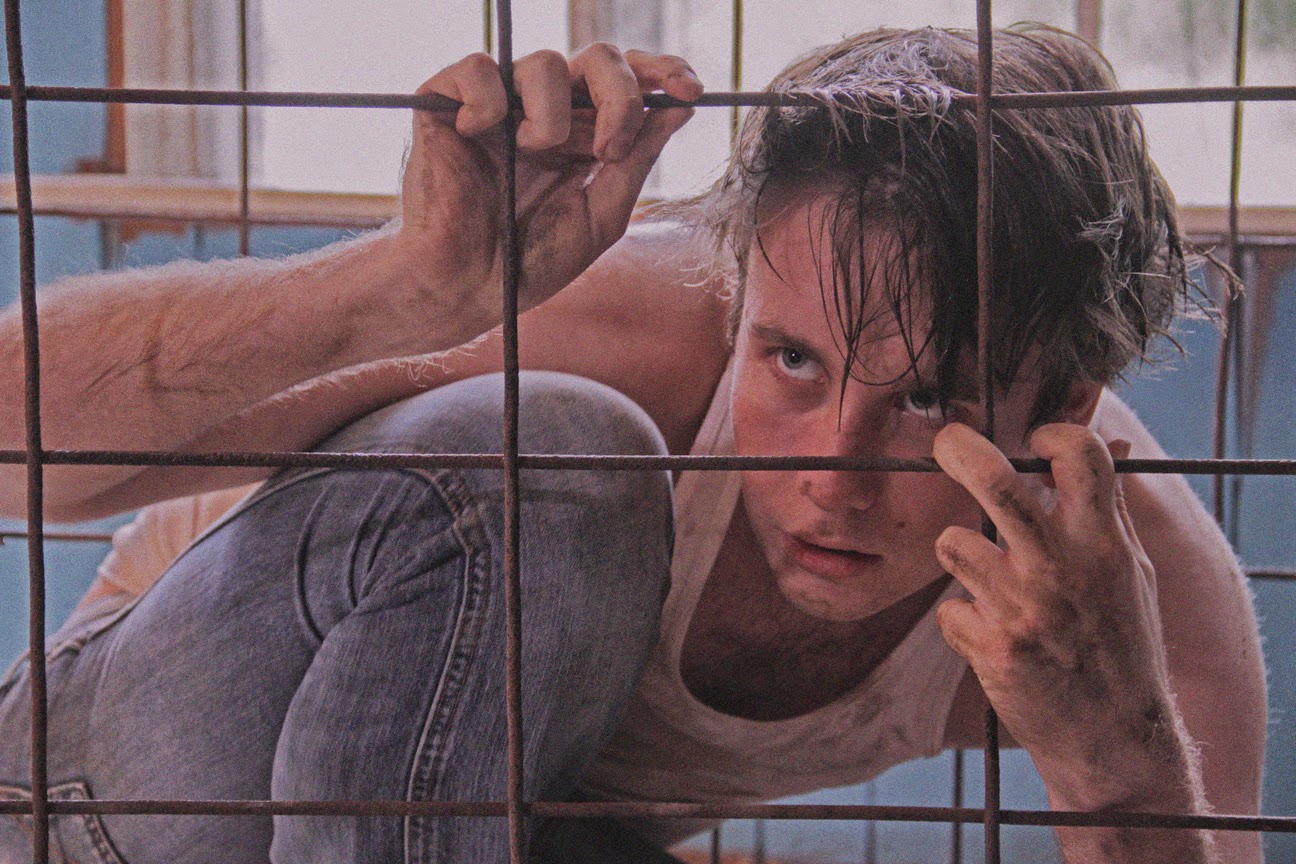 Overall: It’s obviously not for everyone, but for the people at whom HEADLESS was aimed, it fires on all cylinders and will not disappoint. Gorehounds, rejoice! Your film has arrived.