Here's a little something for Halloween. Happy diving.

They picked his bones clean. 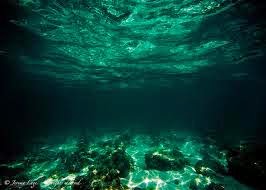 Will was just stuck there wishing he could go into shock but the cool water kept him lucid, wishing he could pass out, but the respirator held fast to his face and there was still twenty minutes worth of oxygen left in the tank. He was caught coming out of the wreck and no matter how he twisted, the tank was stuck. No matter how he tugged or pulled or pressed, the latches at his shoulders would not let the gear go. No matter how hard he batted at them, they kept coming.

“Never dive alone,” they told him. Everyone said that. It played like a clock’s tick in his mind. Never ending. Maddening.

Meat and blood trailed off into the water. His meat. He watched it drift away as the failing sun filtered down. Only fifteen feet to the surface. Only that much further to his boat. How much blood had he lost? How much before the sharks came? He saw the dark shadows swimming just beyond where his eyes could focus, but that was only in his mind.

Will remembered when he was a kid fishing from the pier and a man, fat and sunburned, caught a cobia. The fish was well over three feet long. The fisherman finished one beer and popped another open before he carved off the heavy filets of flesh and packed them in his cooler. He didn’t even gut the thing or kill it. The carcass went back over the side and as Will watched, the fish swam away. He wondered how far it might get before the inhabitants of the ocean started to follow it, to finish the job.

How long. He held up his arm again to look at the gauge. Bones. He saw the bones of his forearm through the bite marks. A school of smaller fish picked at it. Tiny stings of pain over the screaming throbs coming from that arm, from his exposed shoulder, from the place where his ear used to be, from his thigh and his belly. The world was pink and shimmery. Never dive alone. Who is alone down here?

That’s the thing about the ocean. You are never alone. Never. Will suddenly felt cold. Felt dizzy. He welcomed it and smiled.
Email ThisBlogThis!Share to TwitterShare to FacebookShare to Pinterest
Newer Post Older Post Home