The thing about having the shit scared out of you is this…it happens in broad daylight. In plain sight. There’s no build up, no orchestra playing, no Goblin soundtrack, no Tubular Bells. Not even that annoying piano thing John Carpenter wrote for Halloween that still makes the hairs stand on my neck. It just happens. The haunting might be no more than a whiff of perfume or smoke, a flicker in the corner of your eye, but there it was. 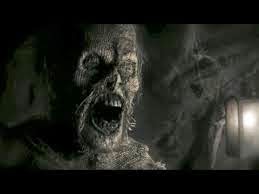 The tension that builds from that moment on is your own doing. Everything becomes suspect. Did I leave that door open? Is it drafty in here? Am I making that chair levitate with my brain power? Is that foul odor coming from the toothed apparition floating in front of me or did I just forget to take the trash out again? See, that’s where the movies get you: Clues.

The real hauntings happen during the day, during the afternoon, in the morning, at midnight…not solely after the sun goes down. The real ones grab you when you’re taking a dump or pouring a bowl of cereal or while you’re trying to scratch that place on your back no one can reach without the aid of some cornerbead or a stick of some type. I imagine at first they aren’t scary. At first you don’t know what you’re seeing, smelling, tasting—witnessing. At first you shake it off or ignore it completely. At first it was a speck of dust in your eye, a headlight from outside, your hangover, that bud you smoked. At first it wasn’t there…but it was.

It was there...and the harder you look for it to come back again, the more you will see. Until it eats you.
Email ThisBlogThis!Share to TwitterShare to FacebookShare to Pinterest
Newer Post Older Post Home