GIVING UP THE GHOST IS HERE!

Giving Up The Ghost by Dan Dillard

Who has two thumbs and a new book out? Well, lots of people, but I'm talkin' about me.

Ladies and gentlemen, I'd like to introduce you to Gerry Sheffield. When he isn't pissing people off and being a lecherous pervert, he's busy using, drinking, whoring and generally screwing up. This would all be fine, except he's a grown-ass man that is hemorrhaging  his sweet, elderly parents bank account like a slit carotid.

To make a long story short, Bill and Margo Sheffield have had enough of their loser son's shenanigans (love that word!) and after bailing him out of jail, trouble, debt, std's and probably a few bouts of rehab, they've changed tactics. Tough love? There's an app for that, even if it kills them.

Well, in fact, it does. After some serious discussion and a look at their resources, they decide haunting him could be the best way to scare him straight, and that's when things get weird. 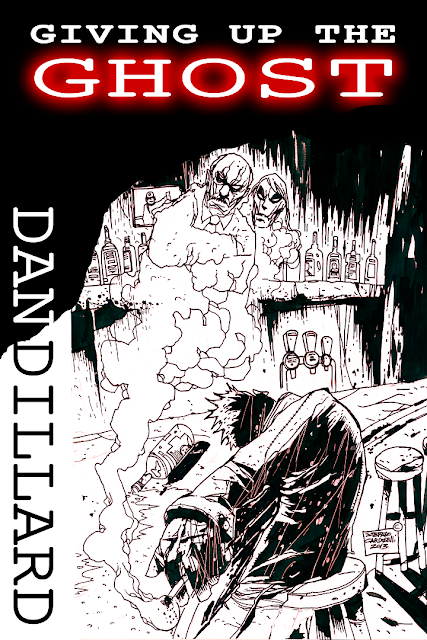 Part paranormal horror, part dime-store sleaze, part dark comedy, Giving Up The Ghost is 305 pages of fun and the sixth book from me. It was my NaNoWriMo piece from 2012 and poured out in a mere eleven days. Editing took quite a bit longer than that and the title changed from "The Spirit Of Parenting" to "Giving Up The Ghost" last minute, but either way, here she blows.

So the official launch is tomorrow, June 1st 2013, but there won't be any fanfare, no fireworks, no television commercials, just a new book I hope you'll all read, tell your friends about and help me sell some writing!

Kick back, grab a good stiff drink, and sink into the world of Gerry Sheffield, a man you will hate, but whose parents you will absolutely love as much as they love each other.

I have to give a quick shout to the cover art by Stefano Cardoselli... He has a slick-sick style all his own...I only wish this was a graphic novel.

The acknowledgements are long on this one, so make sure you read those as well :)

Get it HERE! Then go tell all your friends, bloggers, reviewers and strangers. (Scream it at the strangers, it's much creepier that way.)
Email ThisBlogThis!Share to TwitterShare to FacebookShare to Pinterest
Newer Post Older Post Home