No flash fiction this week.

An eaten face. Sounds like a story or a movie, but it isn't. A man eats his wife's lips. A man eats his roommate's brain. A man mails body parts of his victims. A man opens fire on the patrons of a cafe. A woman kills her pastor. A young girl leaves her unwanted (her word, not mine) newborn in a trash can. A woman drowns her own children... 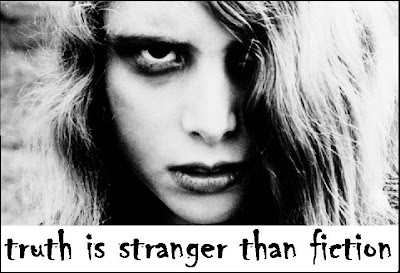 People across the globe do horrible things. That said, most people understand that these occurrences go on all the time--NOT JUST WHEN YOU SEE THEM ON THE NEWS. There is no epidemic. These are not uncommon, although the per-person numbers are low. The killers are always there.
The media is focused on them right now because it sells, and when something sensational happens (not good sensational, but horrible sensational), they jump all over it and beat it to death until something more 'interesting' comes along.
So in honor of the news, I will sit out this week's flash fiction Friday. I'm certain even the most talented writers, at the top of their game, could not make up something near as scary as what real people do in the world every day. I wish it wasn't so.
Email ThisBlogThis!Share to TwitterShare to FacebookShare to Pinterest
Newer Post Older Post Home