The World of Horror Downunder

A gruesome welcome to Rachel Tsoumbakos! She writes and loves Australian Horror Films.

Recently I was lucky enough to have my first novel published, Emeline and the Mutants , through a fabulous new Indie group called http://www.fantasyislandbookpublishing.com/. Another great horror author who recently guest blogged here, Patty Sarro, is also from Fantasy Island.

Emeline and the Mutants is set in Australia, which is where I hail from. The herioine of the story is Emeline Hart. She is stuck in a post-apolyptic world that has been ravaged by an AIDS cure that has gone wrong. Many of the human inhabitants have now mutated into creatures such as zombies, vampire, trolls and werewolves. Originally, this novel was meant to be fantasy-based, but as I began to write it, the horror element asserted itself. 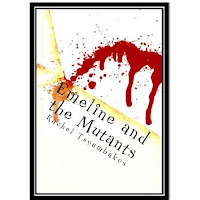 I have had many positive reviews on this book based on it's horror elements. People have also commented on how Aussie horror stories tend to be more gruesome and are quite often based on black humour. I thought I would explore this in this blog today. So here are my Top Five Aussie Horror Flicks of All Time:

This movie is scary on many different levels. Firstly, it is based on a true story about a tourist couple who travelled across the Australian outback on a holiday. Only one person survived. They still haven't found the body of the other. This movie is an interpretation of what could have happened. Secondly, the movie is set in the great, vast outback of Australia. There are hardly any people out here, and there are even less accessible water sources. Thirdly, and by all means the most scary, is the fact that the villian of this movie is John Jarratt. Only Aussies would know this actor well. He is a cheery chap who presents a home and garden based TV show and is married to a lovely lady who is a regular on the long-running TV series, Play School. Jarratt's unstable villian is what true horror stories crave.

I see a continuing theme here, or maybe it is just because most out-of-work actors in Australia end up on Play School, but, once again, we have actors out of the audience's comfort zone. This is one of the very few Aussie horror films that is based around the vampire theme. There is also a good American cast included as well, in a bid to sell the movie overseas. It is a very interesting twist to the vampire genre though. The movie is set in the future, and the vampires have literally drank (and converted) their way towards extinction.

Red Hill was actually billed as a Western/Thriller. As far as I'm concerned though, it is as scary as hell! It stars Ryan Kwanten (who you may know from HBO's True Blood) as a cop sent to a small town on the same day that a local criminal escaps from jail and returns to the town. This movie is not only blood thirsty, it turns out to have an unexpected Aussie moral twist at the end.

Yet another movie that is perhaps more scary because of an actor who is playing a role out of character. That actor would be star of the 80's, Molly Ringwald. While the movie itself, was just your average flick, it had all the blood and gore of your classic scary movie. It's tagline; "It's hard to scream without a tongue," proves this.

This is a cult film. It revolves around a small town called Paris in rural Australia. The town creates fatal car accidents. It is a boon for the poor people in the town, who like to scavenge through the wreckage afterwards. Any survivors are taken to the local hospital where the local surgeon performs labotomies on them with common power tools and then keeps them to use in experimentation. It was actually billed as a Comedy/Horror. For some the humour is too sick, but it certainly rounds out the list of Aussie horror flicks that I love.