The Mistress Macabre On the Hot Seat…

Welcome my new friend and author, Andrea Dean Van Scoyoc. She does zombies like no one else.

1. Where do you get the ideas for your characters, is it all imagination, from real people or a combination of both?

Andrea: Most time my characters are spawned simply from the darkest and most debauched recesses of my mind.

Sometimes I meet people in real life who might flit across my mind’s eye as I write and (depending on how they struck me personality-wise) might make it into my books.

Oh and no…that’s not always a good thing. ;)


2. Do you take a lot of time to formulate the concepts behind your stories and before you write do you create whole backgrounds for the people you write about?

In my opinion, all that is wasted time that could be spent writing. Your first draft is never going to be perfect. You’ll always have to go back and change things, edit and re-write, so why not just save all that effort and put it into the story?

My stories have always…always come to me like a mini movie in my head, playing on some twisted movie projector. Good thing I’m the only one who can see them!

The way I write has been compared to automatic writing. My brain is going so fast, my fingers scramble to keep up!


3. Do you give yourself a hard time line to work within and dedicate a certain amount of hours each day to write or, do you just go with the flow?

Andrea: I start at around 9 AM every day and tend to write until I’m tired, but being as I stay hyped on coffee all day, I usually run out of gas at about 5 PM. Ha ha… 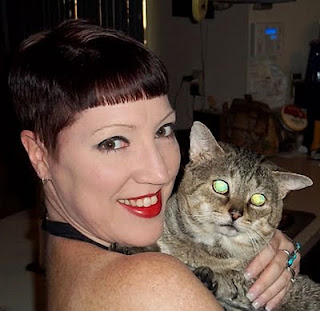 Andrea: Many things. My own fears, my own experiences, the rain, a storm, a dead animal in the road (which always saddens me because I’m a staunch animal lover and rights activist) places I go, etc.

Andrea: It was my dream, as a child, to be a Funeral Director. That was…until I found out that you had to be a Mortician too. I’m a complete and total germaphobe so that would never have worked anyway.

I’d also like to be the caretaker of an old and historical cemetery.


3. What are you currently working on?

Andrea: I’ve just submitted for publication, the sequel to Dante’s Diary – Vampire Lore and More. I’m hoping the publisher will pick it up, but if not…I’m prepared for that too!


4. What has been your proudest work related moment?

Andrea: To this day, it still remains, becoming a Borders number 1 best seller (I actually hit the best seller list while in the store having my signing!) at my very first book signing in June of 2005.

With that said, I have mixed emotions about Borders stores closing. While I’m grateful that I was able to add that feather in my cap of becoming a best seller via (at one time) one of the largest bookstore chains in the entire world, I also have to state that their snooty attitude toward small press/self-published/Indie authors has made it hard for them to compete.

Looking back now, it was when I was first starting out and became a best seller as a self-published author, do I realize that I got lucky. Borders changed their policy to totally exclude small-press/Indie authors, shortly after that event.


5. How does your family react to what you do?

Ha ha! I won’t let my mom read any of my hard-core Horror works. I let her read the tamer stuff and my sweet daddy still can’t really wrap his head around who and what I have become. The world of Horror is practically alien in my family. My parents are hard-working people of the land, used to sacrifice and back-breaking toil to make a living and to sit and write, just isn’t something they are familiar with. I know my parents are proud of me, but I think if they ever came to an event where I’m appearing, they’d not know what to think! 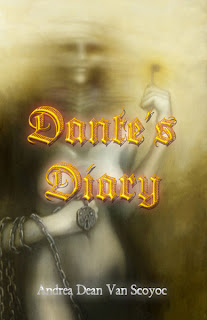 Andrea: Zombies scare the crap out of me. My house is 100% Zombie proof. I’m not kidding. EVERY window and door into my home is surrounded by cast iron grating. They ‘aint getting in my house!!!

But, I still keep hoping that when the Zombie Apocalypse happens, they are the Romero zombies and not the Infected, like in 28 Days Later, in case I’m out and need to get away.

I can run for anything so they’ll catch me if they are the 28 Days Later Infected!


2. What interested you in writing about gay zombies in particular?

Andrea: I make it no secret that Gay Erotica is my guilty pleasure and the one thing that shocks people the most, about me. My zombie works just came out that way. My books write themselves, so when my first works started to take that path, I let the floodgates open and while emotions have been mixed (as well as reviews) on my first works, I always tell people, THIS is why it’s best to research an author before you buy their works.

I write like no other author on the market. Don’t pick up ANY of my books (particularly my first works which also include the best seller and all my award winners!) and think you’ll be getting the same-old-same-old. Believe me…you’re not.

If you’re caught totally unaware (as some readers have been!) you’ll be in for a shocking (and some say gut wrenchingly sickening) surprise!


3. How old were you when you realized that you wanted to be an author?

Andrea: I have been writing since I was a child and my mother said, crafting worlds and weaving in-depth and intricate tales, long before I could ever write.

So with that said…there was never a time that I said, ‘I want to be a writer.’

I simply always have been.


4. Have you ever felt discouraged or that you wouldn't make it as an author?

Andrea: No. That’s because I have encountered nothing but brick walls and detractors since I first stormed onto the ‘scene’ six years ago. I’m used to the b.s.

To the snobs of the writing world, that’s a “NO-NO!” You are supposed to be VERY ashamed if you’ve ever self-published and they’ll accept you after you have shown the proper amount of remorse for your “mistake.”


5. How does it feel to be known as the Mistress of the Macabre?

Andrea: I still have no idea where that came from, but I’m right proud of it and I’ll take it! It makes me feel pretty darn good that people feel so strongly about me.