Bathe with Rhiannon Mills. You know you wanna. 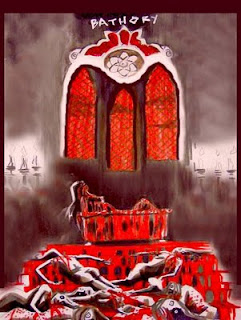 Hi, Dan! Thank you for inviting me as a guest to your awesome, albeit somewhat creepy blog.
I was at first going to share with your readers a bit about mixing sex and horror because that, for quite a while, was exactly what I did best. However, these days the sex and romance has taken a back burner and, because I’m reading more and more horror rather than horrific romances and paranormal erotica pieces, I’m writing more horror, too.

A writer’s life is never predictable!

At the moment, I’m working on a novel about Elizabeth Bathory, The Blood Countess. I’ll be the very first to tell you that she wasn’t always bat-shit crazy. No siree Bob…She started out her life fairly normal for the day and age that she grew up in.

Through research, I’ve found that I can relate to this woman-a serial killer who tortured, abused, and murdered near 650 young girls and women of lesser nobility. Like many other aristocratic daughters of the sixteenth century, Elizabeth was raised as a lady. She was raised knowing that one day she would run the roost, so to speak, and that she would be a role model for the others in her society. She also knew that she would marry Ferenc Nadasdy one day when she was only eleven years old. If someone would have told my eleven year old self that I’d one day become the wife of a coal truck driver (that’s what my husband does) I would have probably ran screaming from the room! I can only imagine being so young and having my mother come into my bedroom one night to tell me that in a few years I was set to marry a ruthless soldier named Ferenc. What sorta name is that anyway?

Elizabeth did what any wayward child would have done. She rebelled…slightly…and had an affair with a peasant boy from the village below the castle she lived in which yielded an unwanted pregnancy at the age of fourteen. One year later she was rushed down the isle to marry Nadasdy and was thrust right into a life she knew she would eventually live. I think that she grew to like her husband, but I don’t think it was a very warm arrangement as the Count was always off at war. Sometimes for years at a time!

That left the Countess to run the castle alone. And that’s where the fun, gross, gory, horrible part starts! Eventually, she began to take her frustrations out on the villagers and servants. If you so much as looked at her wrong, you were punished horribly for your “crimes” and it was never pretty. Once, when she had punished a servant by slapping her rather hard, she discovered that when the servant’s blood hit her own skin, it looked more supple and she thought it made her look younger. After that, she went crazy and had to have fresh blood.

She enlisted the help of a few others and began torturing young virgin girls so that she could use their blood as her own fountain of youth. During this time, hundreds of young women were abused, tortured horrifically, sexually molested and abused, and drained of all their blood via an iron maiden, just so Elizabeth could bathe in it.

Ew-I can’t stand to bathe in water with baby oil in it. I can just imagine sitting in a tub of bodily fluids…I wonder if she at least pinned her hair up?

I won’t prattle any more about Elizabeth Bathory, but I will share a bit of info about the book. As of right now I have no clue when I’ll be done with it. For me, this is the project of a lifetime. It adds a lot of stress to this weary writer’s life because she is such an epic person that if I fail miserably, I may never write again. However, if I knock this one out of the park…well, that’s a very great outcome for me!

“Bathe With Me” will be released on an unknown date (because we don’t know when it’s going to be completed) by Knight Watch Press and will have a kick ass cover and some kick ass horror and gore within its pages. I won’t even let my 9 year old daughter or my 11 year old niece read the foreword. There will be sexual content in the book, but not like an erotica novel. Nothing like what I’m used to writing. I’m holding nothing back with this book. The publisher is slapping it with a mature content warning, so I feel very comfortable with marketing and not letting the book get into wee little hands by accident.

If anyone would like more information about “Bathe With Me” or my upcoming release (date not set, was JUST accepted lol) you can email me at KellyShrewsbury@gmail.com or visit my website at http://www.rhiannonmills.webs.com .
Email ThisBlogThis!Share to TwitterShare to FacebookShare to Pinterest
Newer Post Older Post Home